How Does Ceramic Imitate Stone

How does ceramic imitate stone?!

Last year when many stone association of "Jane Yu Wen rushed to the attack" did not come loose, when the stone industry of tile imitation marble still criticized when Hideyoshi Group Chairman Liu Liang in last night's meeting to share company to put forward a new view: imitation marble ceramic industry trend will bring more the market for stone. Don't believe it? Let's wait and see.

The following is the full text of President Liu Liang's speech:

Is mainly want to share with you some of the things I saw in the Italy Bologna exhibition today, maybe you have seen me in the circle of friends essay, but tonight I want to focus the exhibition in the process of thinking about it.

Bologna Italy ceramic sanitary ware exhibition is the world's top ceramic professional exhibition. For the past ten years, I've been there every two years, because the trend is about two years, so I hope to find new elements every two years at this fair.

In the past ten years to visit the exhibition in Bologna at the beginning of the show China enterprises face is very small, even can say no, because it was thought that the foreign mainstream China enterprise ability too much plagiarism. But with the development of the history, many famous Chinese ceramic enterprises have been active on the stage of Bologna exhibition, especially in Guangdong. The foreign market has realized that China's popular elements and the purchasing power of China will profoundly affect the future consumption trend.

But after two years, when I returned to Italy Bologna exhibition, I found that the exhibition did not change much, and it was simple and repetitive. It's a little closer to their theme: less is more, which, in my opinion, is "spending less money", although the organizer says, "simplicity is the best.".

In fact, this exhibition has developed into a difficult period, that is, the bottleneck period. In the pictures to be shown next, you will find a great trend, that is, the ceramic imitation of various materials, from the beginning of the solid color, blue, white, green, red, and then? To wood floor color to the color and texture of imitation stone now. That's one of the reasons why I went to Bologna to show, because I'm going to see how ceramics imitate our stone 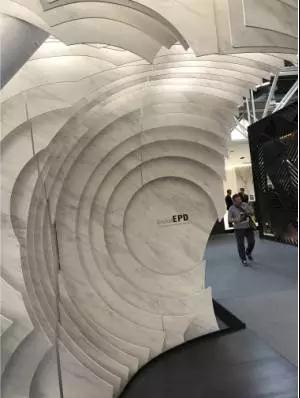 Look at the floor, is not like a stone wood series? 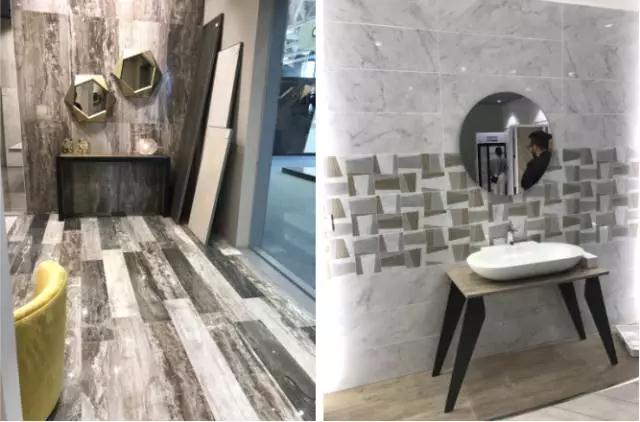 This is the "grey" or "carved white"? But this kind of imitation marble tile has been made very standardized, that is, in addition to the large plate, mosaic family can do.

Next, we see a picture here with the English word: STOP FAKE, CHOOSE NATURA. The owner of the mine made a real stone booth at the ceramic exhibition, declaring the stone sovereignty, telling the exhibitors around the world: "you are all fake, and you are all deceptive.". So this place is interesting. 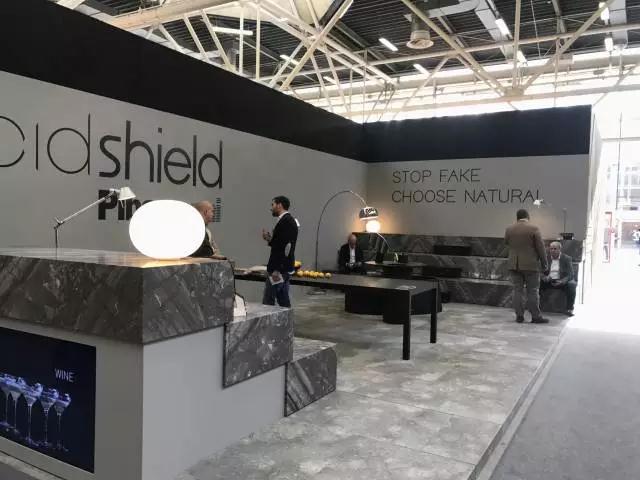 We look at the right side of this is not like the Grand Skylight?

There are a variety of other stone elements, there are similar or other varieties of Carrara white stone. 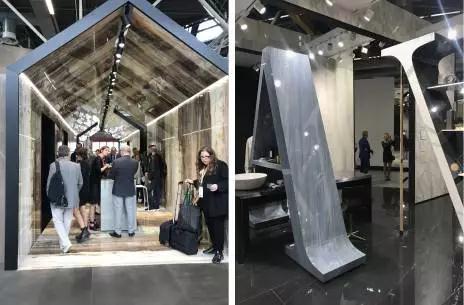 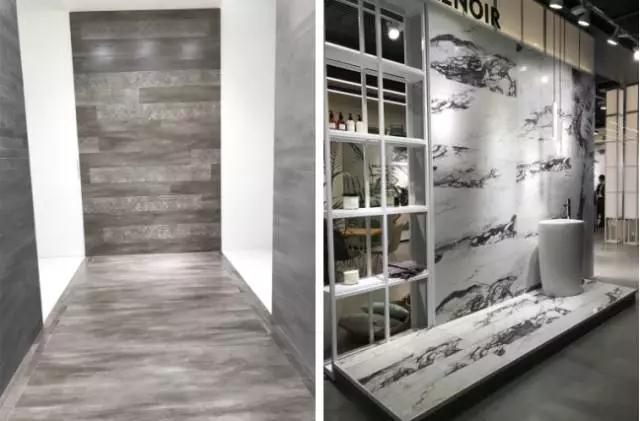 You can see, all the bathroom space is basically the concept of stone to show.

Until now, we have all the exhibition in Bologna, I personally think that can bring some thinking about the place looked at them all, you can see, we are all words convergence of ceramics and stone. 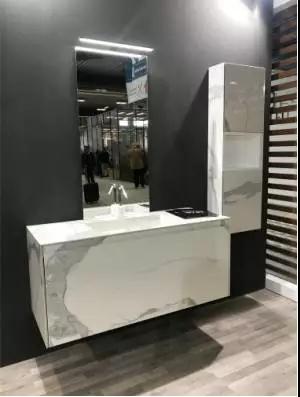 In this exhibition, I was lucky enough to meet a variety of popular Italy ceramic general agent of Beijing District, chat when he said: "we have the end of hills and rivers." Because now it's more like imitation than stone. Later, I met other ceramic exhibitors, and I said I was stone, and he said, "Gee, you're so happy."!"

What is happiness? Because we have a lot of varieties, a lot of elements, a lot of texture can be applied, and ceramic can only follow us, which breed popular follow us. So now you should know why Jane came to imitate marble for a while.

This is my overall feeling, ceramic and stone fight, they are beginning to benefit, because everything natural imitation, but for a long time will find that he can surface imitation stone, natural stone texture, but they do not shaped. So, I think: Ceramic imitation stone will bring greater market for stone. Let our real consumers know: eh? The pure natural stone is so beautiful. I believe that when our price is closer to tile, the stone market will be bigger.

So in Bologna ceramic bathroom exhibition, I think it is ceramics in the stone advertising, we may as well wait and see its change, slowly benefit can be.

After roaming through Bologna, Liu Liang continued to share his knowledge and impressions on the stone exhibition in Italy, Verona, looking for the future breakthrough point from the perspective of stone itself.

After roaming through Bologna, Liu Liang continued to share his knowledge and impressions on the stone exhibition in Italy, Verona, looking for the future breakthrough point from the perspective of stone itself.

The original plan of Bologna Ceramics Exhibition for the first time around, Liu Liang read for half a day, took more than 28000 steps; the original plan for the first time after the Verona exhibition, Liu Liang for more than 3 hours of time to read, walked more than 18000 steps. As the world's top stone exhibition "old acquaintance", behind the exhibition time decreasing, Liu Liang believes that the hidden common anxiety, the moment he said: "the stone stone industry has come to a very confused crossroads. At the stone exhibition in Verona, you will find that everyone is thinking about the way out of stone."

Behind the crisis consciousness, is the corresponding breakthrough made by the industry. As the seemingly calm sea, countless fish scrambled to breathe out of water. Under the anxious situation, the breakthrough point of stone enterprises is not only the change of color system and variety, but also the diversification of product design and marketing channels.

These changes, Liu Liang saw, and followed it up. 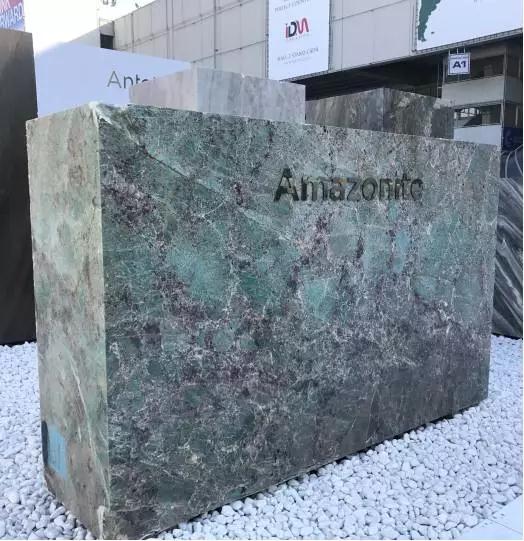 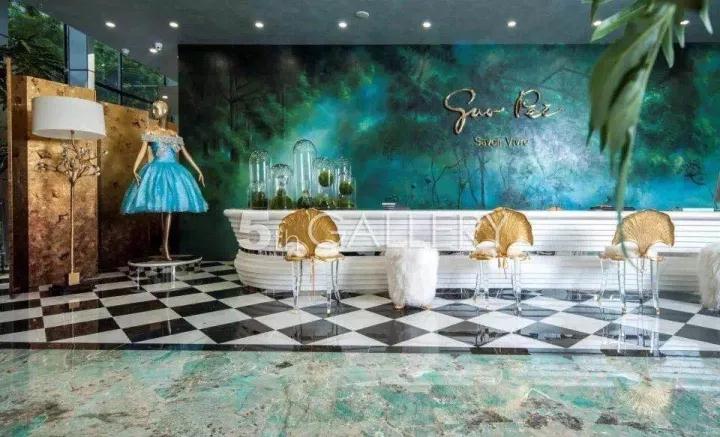 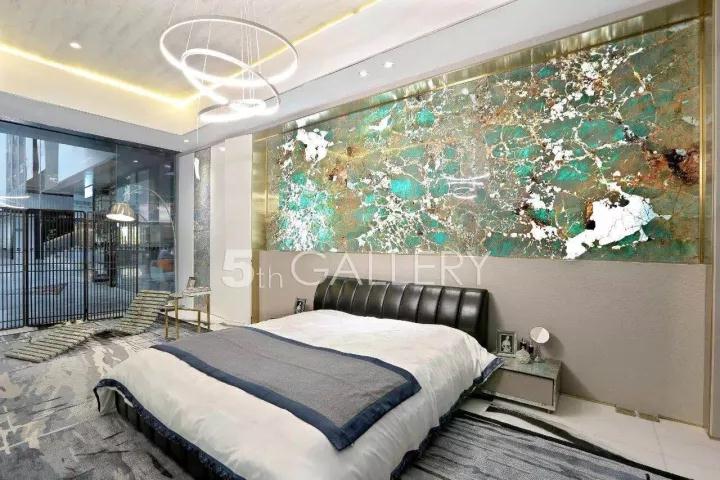 For example, the shine in the stone exhibition in Verona on the "Amazon green", good English group has taken Asia. The agency as early as 2 years ago, and is widely applied to the field of Home Furnishing, such as interior walls, floors, walls and other background. Its refreshing rainforest color and delicate texture deeply loved by designers, and in August this year, stunning debut "GUOPEI advanced customization center" Beijing China World Trade Center flagship store.

As a representative of the next year and the trend of Verona exhibition, exhibition on the new popular varieties are found in the 80% British good group No. five warehouse, for this "coincidence", Liu Liang said: "this shows that we have been in the right direction, do the right thing."

The Verona Stone Exhibition on the No. five warehouse with treasure

"Standing at the height of the world to see the world's products."." Sharing the final summary of the bearing Liu Liang's consistent ability and boldness of vision, but also contains the British group in the stone industry overall transformation period vision. Although there is still imitation, although the internal struggle to seek a breakthrough, but the complex arena never affect the heroic exploits.

PrevPreviousWhat Is Nano Glass?
NextTiles Can Be Used Both For Flooring And On The WallsNext